An introvert in the real world, an avid bibliophile, an earl-grey tea lover and a newly-established book reviewer. Sofia's Book Blog!

Every dawn brings horror to a different family in a land ruled by a killer. Khalid, the eighteen-year-old Caliph of Khorasan, takes a new bride each night only to have her executed at sunrise. So it is a suspicious surprise when sixteen-year-old Shahrzad volunteers to marry Khalid. But she does so with a clever plan to stay alive and exact revenge on the Caliph for the murder of her best friend and countless other girls. Shazi’s wit and will, indeed, get her through to the dawn that no others have seen, but with a catch . . . she’s falling in love with the very boy who killed her dearest friend.

She discovers that the murderous boy-king is not all that he seems and neither are the deaths of so many girls. Shazi is determined to uncover the reason for the murders and to break the cycle once and for all.

This book is a rather dark re-telling of One Thousand and One Nights. The boy-king Caliph of Khorasan, Khalid, takes a new bride each night only to kill her by sunrise. The protagonist, Shahrzad, volunteers herself... not just to break the cycle of death, but to unravel the mystery of it, and to kill the Caliph to exact revenge.

Almost like Beauty and the Beast, this leaves room for a mushy Stockholm Syndrome hate-to-love relationship, but despite the complicated magic weaved into the tale, is far from.

“What are you doing to me, you plague of a girl?” he whispered.
“If I’m a plague, then you should keep your distance, unless you plan on being destroyed.” The weapons still in her grasp, she shoved against his chest.
“No.” His hands dropped to her waist. “Destroy me.”

Shazi, the MC's nickname, slowly finds herself falling for the Caliph, however this is not written or executed in a predictable manner, as it is well-paced and, unlike how many find the 'Beast', it is very easy to fall in love with Khalid, the Caliph, once you learn his story. She finds increasingly difficult to hate Khalid, and more importantly, kill him.

Now, in a book I, personally, like a strong protagonist - not necessarily in physical sort of way, but I like heroines who are fierce and rather unpredictable. Shahzrad, (sometimes Scheherazade), is a very fiery and silver-tongued girl. She shows a lot of grace and enchants Khalid with her clever plots in her story-telling in order to live one more night.

Other than the plot and endearing characters, I really love Renée Ahdieh’s writing style. She builds the world of The Wrath and the Dawn really well and her descriptions are very beautiful and charming. The writing itself is very lovely and flows in a magical fashion befitting the setting of the novel. Ahdieh has set the perfect tone with her descriptions and the dialogue was both thought provoking and witty a good portion of the time.

There is one reason that I rated this as 4 Stars (I was tempted to rate it as 3.5, but decided otherwise due to the points above) in lieu of all full 5. I didn't quite like the relationship between Shazi and Khalid. Don't get me wrong, I squealed hysterically in some adorable scenes but I just couldn't fathom how she simply forgot the murder's of the girls, including her best friend. I liked the scene when Khalid said, through his confession writing, Shiva, Shazi's friend, understood his torment, but Shazi didn't register this. Once the reason for the murders (as said in the synopsis - so not a spoiler) she just didn't care - that's impression I got. The reason for the acts certainly didn't justify why he deemed his life more important than a hundred - but I feel as though Shazi believed it did.

Because of this, I wasn’t completely sold on the romance. Whatever reasoning Khalid had, he was still a murderer. Shahrzad’s intentions to avenge her friend’s death, were, in my opinion, completely justified, but then she almost forgot about her guilt. It was impossible to forget that and, even when they were falling in love, they were both still guarded with secrets. I did get sold on the friendships. They were great. From the newness of Shahrzad and her handmaiden Despina, to older friendships like Khalid and his cousin Jalal, or Tariq and Rahim who knew Shahrzad before she became queen.

Marie Lu describes The Wrath and The Dawn as "an intoxicating gem of a story" on the cover. Though it doesn't feel good to copy this, I don't think I can express my opinion on this book in other different way. Can't wait for book #2! 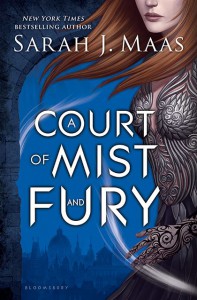 On the note of pairings, FEYSAND. Rhysand is, despite always being considered the 'heartless' and 'sadistic' most powerful High Lord, he is actually very thoughtful and selfless - to the point of sacrificing his own happiness to protect those he loves - just like Feyre did for Tamlin (*shudders at name*). Rhys doesn't want to stifle Feyre's strength and lock her away for her own protection like He did... and I loved the part when he appoints her as the High Lady of the Night Court. I screamed when he announced that, mainly because Tamlin never even considered giving that title to Feyre and he shut her down when she pushed him. *angry face*

Rhysand, unlike Tamlin, wants Feyre at his side, as an equal, as his Mate *inwardly squeals*

And I love that so much!

They had let a fox into a chicken coop

Future aspiring writers, remember the ending of this book; it is how you ensure that your readers will count down the days to your book's release. Though it wasn't a cliffhanger, it still ended on a very, very mean ending, in the best possible way. I've re-read the book about five times already, and still cry at the end.

"'This book will destroy you.' is like the highest praise you can give to a book."

This book thoroughly destroyed my feels. 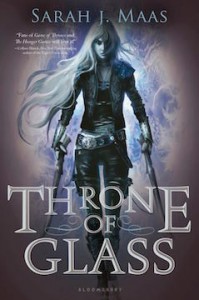 Whenever I so much as hear this title:

I absolutely love this book. Sarah J. Maas, the Author of Throne of Glass, was just sixteen when she wrote the first incarnation of her novel. I find it her style very distinguishable as her writing is practically adorned with endearing characters, beautiful description and vocabulary, and charming wit.

“Didn’t I give you three pounds of candy?”
She smiled impishly.
“You ate half the bag!”
“Was I supposed to save it?”
“I would have liked some!”
“You never told me that.”
“Because I didn’t expect you to consume all of it before breakfast!”
She snatched the bag from him and put it on the table.”Well, that just shows poor judgement on your part, doesn’t it?”

Though I understand many dislike the book's heroine, an assassin called Celaena Sardothien, I found her to be a very deadly and beautiful character. I admit that she did not follow through with a lot of her threats, and I wouldn't exactly agree with the cover's description of a Heart of Ice and  a Will of Steel - but as she book continues, and the character begins to unravel bit by bit, it becomes clear she is a very complex and enthralling character. And, to those who describe her as petty and annoying...

"Something frozen rushed through her veins. "They died too quickly."

"But you were a woman in Endovier," Chaol said, his voice rough and quiet. "No one ever..." He trailed off, unable to form the word.

She gave him a slow, bitter smile. "They were afraid of me to begin with. And after the day I almost touched the wall, none of them dared come too close to me. But if one guard tried to get too friendly... Well, he'd become the example that reminded the others I could snap again, if I felt like it."

“So Celaena only smiled at them, tossed her hair, and batted her eyelashes at the prince’s back.
Her arm stung. “What?” she hissed at the Captain of the Guard as he pinched her.
“You look ridiculous,” he said through his teeth, smiling at the crowd.
She mirrored his expression. “They’re ridiculous.”
“Be quiet and act normally.” His breath was hot on her neck.
“I should jump from the horse and run,” she said, waving at a young man, who gaped at what he thought was a court lady’s attention. “I’d vanish in an instant.”

“Yes,” he said, “you’d vanish with three arrows buried in your spine.”
“Such pleasant talk.”